For most EU consumers, shrimp is now considered as common food, and few people question its origin or the way it is produced. Contrary to popular belief, most shrimp is farmed and not fished: more than half of the global production (8.2 million tonnes) comes from seafood farms – or aquaculture. Combined with growing aquaculture production worldwide, "feeding the world" comes at a social and an environmental cost.


Farmed shrimps are mainly produced in tropical areas. The first impact of shrimp farming comes with the creation of the farm itself, which can have a negative impact on mangroves. It is estimated that mangroves store the equivalent of more than 21 gigatons of CO2. When they are destroyed, they release these gases into the atmosphere and contribute to climate change. For local populations, mangroves also help cope with climate hazards and ensure their food sovereignty.


All types of farming operations necessarily have impacts on their surroundings, shrimp farming is no exception. This is particularly due to the high stocking densities causing the production of harmful effluents, which can pollute soils and rivers nearby the farms.


Labour is also a source of concerns as it is important to ensure that no shrimp workers (either on farms or in factories) is a victim of abuse or slavery.


At last, farmed shrimps need to be fed. Shrimp feed is mainly composed of marine ingredients, soy and wheat. Shrimp feed can be associated with overexploitation of marine resources and deforestation due to soy production.

80% of the global production is located in Asia

40% of French imports are coming from Ecuador

70% of mangrove destruction due to shrimp farming

Since 2019, Earthworm and its partners have been working to make shrimp farming more respectful of people and the environment, particularly in Ecuador. We have several ongoing projects:


In partnership with Mr.Goodfish, a European Programme on sustainable consumption of seafood products by the Nausicaá national sea center, a code of conduct has been created to be used as a guidance on the ground to improve farmers’ practices. The code of conduct is made of 4 pillars: feed, breeding practices, ecosystem impacts, social impacts. Earthworm's Ecuadorian teams have already visited several shrimp producers and are supporting them in implementing new practices. Shrimp producers have the opportunity to join the Mr.Goodfish programme and upon completion of all requirements of the code of conduct, value their good practices thanks to the Mr.Goodfish brand.


A precompetitive initiative, composed of companies selling shrimp on the French market. The group is aiming at improving shrimp farming practices in Ecuador, and is composed of:

A first supply chain mapping exercise enabled the group to select the Ecuadorian processors which appeared to be the most linked with the French market. Using the code of conduct built in partnership with Mister Goodfish, EF team in Ecuador is supporting the shrimp producers, which are supplying the French market, at improving their practices.


EF and BioMar started their collaboration in 2021. BioMar is one of the top 3 global aquafeed manufacturers, and a recognized leader in sustainability. Our partnership focuses on shrimp feed produced by BioMar in Ecuador, with the aim of producing better shrimp feed but also improving the sourcing of ingredients (no deforestation, less reliance on marine ingredients). It also focuses on better efficiency so that shrimp farmers need less shrimp feed at the end. BioMar has a holistic approach to sustainability: a better fed shrimp also needs to be better farmed. That is why EF is also involved alongside BioMar’s customers to understand their current practices and how to work together towards improvement.


Still in Ecuador, AFD and EF are exploring together how to create favorable conditions for the establishment and development of an insect production sector in Ecuador. The project started in January 2022 and will last for 18 months.


CLS has been a worldwide company and a pioneer provider of monitoring and surveillance solutions for the Earth since 1986. EF is conducting a short mission in Vietnam consisting in collecting shrimp farm data in 2 provinces (Bac Lieu and Soc Trang) of the Mekong Delta to better understand the farmers’ practices and inform a GIS (Geographic Information System) tool that CLS is developing in the framework of NAGIS FASEP project, funded by the French Ministry of Finance. 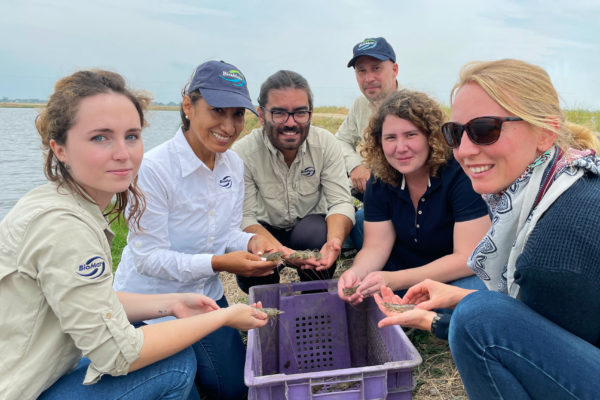