Home from Slovakia, Björn Roberts reflects on a quiet threat to northern forests.

It was snowing in the Tatra mountains of central Slovakia. I was there with TFT’s Alastair Herd to find out how forests are managed to protect conservation values and provide wood for industry. Snow isn’t what we’re used to – TFT is best known for our work to stop tropical rainforest destruction. Yet TFT member companies also need to know how their supply chains affect communities and ecologies of the vast forests of Europe, Russia and North America.

Forests cover a third of Slovakia where they are home to bears, wolves, lynx, wild boar and many other species. Mixed beech woods dominate the lowlands, elegant in their autumn colours, but Alastair and I drove up into the wintery Tatra to see stands of spruce – large, tough conifers that grow tall despite the harsh climate and acidic soil. We were there to assess risks in the mountain forests that produce fibre for paper and packaging used by TFT members.

This was a great opportunity to find out about forest governance in a country that gained its independence and own government as recently as 1993. We wanted to discover the key forestry laws and regulations, and to see what is actually happening on the ground – we know from experience that fine laws don’t guarantee good practice.

We learned much about forestry in the Tatra, and the legal obligations to identify and protect ecological values for wildlife and local people. We visited different types of forest sites where we found that the right actions had been taken. The most significant areas are protected from all timber logging. In other places only low-impact ‘selective logging’ is allowed and practiced. We discussed with the foresters how they combine timber production with conservation, and we visited a pulp mill and Slovakia’s largest sawmill to investigate how they trace the huge quantities of wood that they constantly consume.

On the face of it, a clean bill of health – no serious illegal logging, conservation measures on paper and on the ground, and effective timber tracing systems in place. But that wasn’t the whole story. We also saw large patches of cleared mountain side in protected areas. This wasn’t the work of chainsaws, but storms and of spruce bark beetle infestations that weaken and kill trees, radically altering the forest ecology.

We heard that this has happened on such a scale that a large part of the industry’s spruce timber requirement is met by clearing up after storms and by bark beetle ‘hygiene felling’. You might wonder if these problems are exaggerated to disguise timber harvesting, but where we looked we found the unmistakable signs of ‘wind-blow’ – hectares of snapped and fallen trees that will be nightmarish (and expensive) to untangle, and signs of decline typical of bark beetle attack.

Today forest governance in Europe varies, but is generally effective and responsible. We cut down most of our primary forests decades or centuries ago, and the few areas that remain need protection. So do the large areas of managed forest like the ones we saw in Slovakia. But the illegal logging and encroaching agriculture that rip into tropical forests are not the problems here.

Across the higher northern latitudes, forests are increasingly strained by pathogen attacks (insects and fungus), storms and other extreme weather events. These are intrinsic elements of forest life, but fungi, insects and invasive species are far quicker to adapt to and exploit the increasingly warm and unpredictable climate than are slow growing, static trees. Far from the large scale deliberate destruction that happens in South East Asia and elsewhere, total forest cover is actually growing slightly in Europe. But under the canopy things are changing – gradually, continuously, but sometimes dramatically.

Home in England I went for a walk in the New Forest – William the Conqueror’s hunting forest planted 1,000 years ago. No November frost as the temperature was over 20°C (this is set to be another record-breaking warm year in the UK), and no sign of anything but ancient, beautiful and well conserved woodlands – until I came across a stand of mature oak, all dead, maybe killed by prolonged flooding (we’ve also had the wettest years recently). We can’t attribute a particular storm, infestation or flood to climate change, yet the pattern of changing weather and increasing die back of whole tree species made me reflect that we’ll need more than conventional good management to ensure our forests’ future.

It’ll be a long hard scientific challenge to understand how changing climate affects different forest ecologies, and then adapt woodlands to become more resilient – but it’s necessary and it’s under way. Meanwhile the problem’s root cause is clear – too much greenhouse gas pumped into the atmosphere. Tropical forest destruction is among the largest emitters, so it turns out that TFT’s work for No Deforestation palm oil, timber, pulp and paper, rubber etc in Asia, Africa and South America is also very relevant to forests in the north. 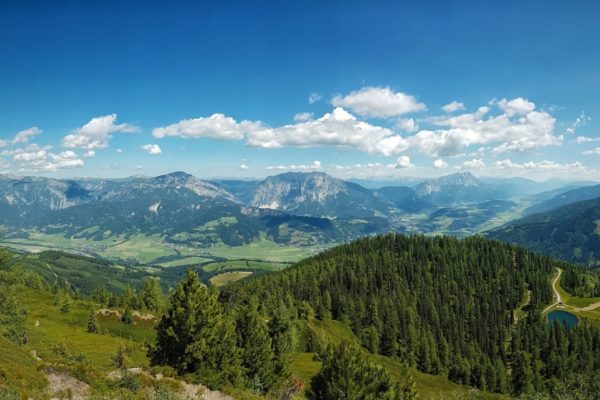