Celebrating our programme which sees the farmer as an entrepreneur.

March saw us launch our initiative Rurality, which works to support smallholder farmers. The launch was marked by a screening of the TFT produced film Paysan, which tells the story of two farmers from Africa and Europe. Here are the highlights of interviews from the event with TFT CEO, Bastien Sachet, Head of Rurality, Marianne Martinet, Nestlé’s Benjamin Ware and Director of the film, Sylvain Renou.

HOW THE IDEA OF RURALITY CAME ABOUT?

TFT’S BASTIEN SACHET: I grew up in the countryside and I have seen farmers not being considered or respected around the world. But I believe farmers are at the heart of our society: they make our food; they maintain our landscapes. Recognizing that role, supporting and empowering them was something that was very close to my heart. When I was in Brazil visiting a smallholder plantation it struck me that we were working with companies that source materials from hundreds of mills and those mills were connected to thousands of smallholder farmers.

But those mills were not working with these smallholders. I thought about how we could increase this collaboration. That way we could start a discussion about creating value by improving smallholder livelihoods and better managing natural resources.

WHAT IS YOUR VISION OF RURALITY AND HOW IS IT DIFFERENT FROM OTHER SMALLHOLDER PROGRAMMES?

TFT’S BASTIEN SACHET: A lot of programmes see the farmer as a victim and want to help him. Rurality sees the farmer as an entrepreneur. We want to support him in the expression of his vision and the success of his business. The second key difference is that a lot of current programmes are disconnected from the supply chain. NGOs find a project that is interesting and start engaging with farmers, but the market connection is the last thing they look at. We look at projects located in the supply chain of our members, brands companies that buy the raw materials, and we use that market connection in the supply chain as the entry point for the project.

WHY DID YOU CHOOSE TO WORK WITH SMALLHOLDERS?

TFT’s BASTIEN SACHET: Because they are present in all supply chains. There are millions of smallholders that produce cocoa, coffee, milk, wheat and most of the crops we consume on a daily basis. They hold the key to creating a sustainable future. Rurality is a way to tell their story.

HOW DO YOU IDENTIFY WHICH PROJECT TO PURSUE WITH RURALITY?

TFT’S MARIANNE MARTINET: All the farmers we work with are in the supply chain of our TFT members, so we already know the actors upstream. Our teams in the field observe which mills, factories or buyers the smallholders supply to. This is where we build upon TFT’s past experience of doing numerous assessments at palm oil mills, with cocoa buyers and across other commodities to identify various challenges.

A second criteria is the willingness of the stakeholders to cooperate, because this is a voluntary process. Even if we find the best location to carry out a project – that, for instance, is relevant because the mill is close to a national park and has huge implications on the forest – we cannot promote transformation if the mill is not willing or there is no demand from the farmers. That is why, in a scoping phase, we assess the farmers’ needs and expectations from such a project through dialogue with farmer’s associations and mills.

The reality for smallholders today

FARMERS ARE DIFFERENT ACROSS THE WORLD. WHAT COMMON CHARACTERISTIC DO THEY HAVE?

TFT’S MARIANNE MARTINET: All farmers are risk takers. For example, sometimes they invest all of their capital and even their family savings in one crop plantation that can be subject to risks like climate change. They could lose everything overnight. Of course, we live in an unpredictable world, sometimes these choices turn out to be the right ones and sometimes not. From what we have observed in the field, many farmers are already innovators. Farmers are quite isolated, so they have to single-handedly find solutions to the challenges they face. This pushes them to have innovative ideas which are not necessarily revolutionary or extraordinary, but rather simple and effective.

SO WHAT CHALLENGES DO BRANDS FACE IN SUPPORTING SMALLHOLDER FARMERS?

NESTLÉ’S BENJAMIN WARE: I think the biggest challenge for Nestlé is to identify the farmers in the supply chain and to understand them and their environment, context, needs and choices. Once we have done this we can provide them with the necessary resources, either in terms of people in the field, such as Rurality field officers, or price incentives, or equipment. Every situation is different and there lies the complexity of our job. Rurality is an integral part of this, it is one tool among others to make sourcing more responsible.

WHAT SORT OF FARMER INNOVATION HAVE YOU SEEN?

TFT’S MARIANNE MARTINET: I met a farmer in Africa who was trying to mix rubber and cocoa by alternating rows of these two crops. We do not know if this is a good mix but he wanted to experiment. Another farmer was trying to use manual methods to fight crop diseases instead of chemicals because they were too expensive. In Malaysia, to tackle the issue of elephant encroachment in palm plantations, farmers have explored simple solutions such as making noise at night. These small innovations can make a difference. This is something we have observed across our different projects in Europe, Asia, Africa and South America.

Background on the film Paysan

HOW THE IDEA OF PAYSAN COME ABOUT?

PAYSAN DIRECTOR SYLVAIN RENOU: NGO communication is often centred around social networks. I wanted to create something different for Rurality, something that would encourage people to meet and connect and provide a space for freedom of expression. Therefore, a movie about the role of the farmer in society, which is the core of the Rurality initiative, was a pretext to invite people around a piece of work and get them to express their view on the topic.

DO YOU THINK THE TWO FARMERS IN THE FILM SHOW THE REALITY OF FARMERS WORKING IN THE COCOA OR MILK SUPPLY CHAINS?

NESTLÉ’S BENJAMIN WARE: I think farmers like this are a minority, we need them to lead by example. I also think they represent the future of agriculture. Currently, the majority of farmers are still doing conventional agriculture and change is slow. However, I am convinced that when they see significant change, it will bring everybody on board.

WHAT STOOD OUT FROM THE FARMERS IN YOUR FILM?

PAYSAN DIRECTOR SYLVAIN RENOU: The creativity of the two farmers was really impressive. I first shot in Africa in a very remote area. It was something very new for me. I could see the farmer was not a poor victim, he just needed more logistical support in order to be more resilient. But these guys are in the middle of nowhere, yet, so innovative and so strong. I realised that the image of farmers we have in Europe, of poor and vulnerable people isn’t realistic.

When I went to Toulouse to photograph the French farmer, I thought it would be easier because we were in a European country. But it was tougher than in Africa. I had never seen someone work that much. Antoine was waking up at 4 am and working until 10 pm. I did not know it could be physically so demanding.

We thought it would be nice to compare and contrast the rural reality in countries with different levels of development. In the end we realised that their daily lives in Ivory Coast and France were very similar and that they had a lot in common. 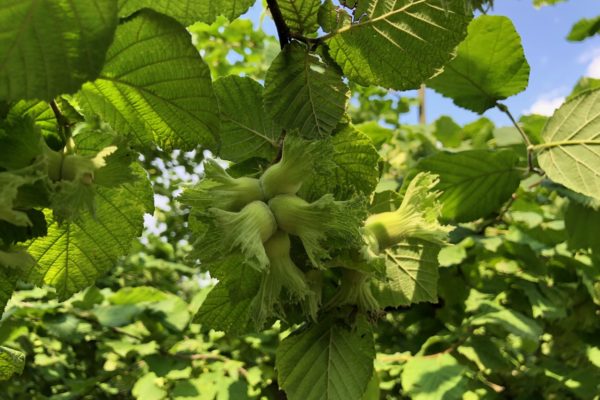 Working towards a hazelnut industry that creates value for all