Part 2: A journey through India and Sri Lanka retracing the journey of Sangamitta nearly 2,300 years ago to take a cutting from the Buddha Tree.

We headed south towards the sawmill town of Hisar where I would be able to see and photograph the harvested shisham and, in particular, the TFT separated timber.

The road was busy as usual with cars, lorries, people and animals and our progress was slow. We arrived in the premature dusk caused by the low lying mist – for a brief moment the golden circle of the sun appeared in the haze before winking a few times and fading to nothing. For a photographer it was bit tantalising.

We were greeted by Sanjay Nagpal, the Manager at the Hisar sawmill. A tall man with bright eyes and radiating a sort of calm around him, he quickly piloted us out to where the stacks of shisham were laid out – on one side was the blue marked timber associated with TFT.

Although I found the trees in the field not particularly inspiring, the shisham were rather attractive as cut logs with their cross-sections showing their deep red heart wood and honey-coloured sap wood.

We were then shown to an experimental shisham nursery before being taken behind the workings of the log yard and into an area of tranquility.

It was quite remarkable how quickly the hustle and bustle of the sawmill and one of India’s main national highways faded into the background once amongst the trees. We were steered towards the back of the plot to where members of the TFT team had planted commemorative trees and much to my surprise, I was presented with a small shisham tree to plant myself.

The short amble through the tall trees and newly planted saplings was refreshing and we retired to the manager’s office where we proffered a series of beautifully hand-written ledgers. It was explained that all logs were tracked already in a system that would be quick to adapt to a “chain of custody” model. As we had seen in the log yard, shisham timber was already being separated and marked allowing it to be traceable.

Day four started with an incredibly dense fog blanketing the city of Hisar however, Girish quickly noticed that it was clearing much more rapidly than previous days and that our luck may have finally changed.

The first call of the day was to a farmer called Sajeet Kuma near Kirdhan, a village situated around an hour outside of Hisar. The main interest of this particular visit was to see a block plantation rather than the field edge shisham trees that we had been witnessing so far.

I had begun to really enjoy the surprises when travelling between locations. As on previous days, we saw vehicles heavily laden with the end of the harvest. My particular favourite were the tractors with trailers on which a sort of giant bulbous bag of rice husks or cotton were carried. From a distance the bulging giant bags were reminiscent of half-filled hot air balloons or loaves of bread that were still rising. My other favourites were the numerous camels (apparently from Rajasthan) who pulled carts. They were much larger than I had remembered and appeared to have a rather haughty indifference to the world around them.

The first notable thing about the site was the sand. The ground was more desert than field and in fact, one of the jobs that this particular block planting of the shisham trees aimed to do was help dune stabilisation. We stepped out of the car and headed up a short rise to where I thought the best vantage point might be for the first photos. Immediately we could see large animals not 80m away. There were in fact the wild cows that have free range across the farms in the area. But they weren’t the slow ambling cows that I am familiar with but large graceful and speedy animals. The front halves are particularly powerful while their bodies taper rather like an Okapi towards the rear and they run a bit like a small, fast giraffe. They weren’t particularly afraid and so we were able to get a good view of the females with their honey-coloured coats and one big male with his blue/black markings and thick, muscular tail raised vertically up in the air. One minute they were there, the next they had galloped over a ridge and out of sight.

The plantation covered several hectares and the farmer said that it was that an excellent crop for such a terrain. Again, the trees had been marked and recorded but this time the volume of standing timber was calculated using a series of sample plots.

The final farm we visited involved yet another drive of about an hour. The weather had picked up quite a bit and a watery sun could be glimpsed from time to time momentarily adding a brush of colour to a landscape that had been drab all week.

The final farm was set on a vast irrigated plain chequered with fields either of rich-looking soil or planted with the yellow flowering mustard crop. We were warmly greeted by Krishna Rao (at Teleonwali) at a part of his farm where the house and compound of one of his tenant farmers stood. It was a flat vista in every direction only broken with square fields of yellow mustard plants and the feathery shapes of the shisham at the field edges.

Krishna turned out to be not only a well-respected farmer of the area but also a social organiser and an innovator. As an example, he described how his committee equitably managed the water from the government irrigation system and how they had raised the funds to maintain it. Apparently, in common with many government schemes, the irrigation channels were constructed and the local communities had to then take responsibility for managing and maintaining – something that not all communities had experience of. The one with which he was involved with developed a complicated equitable sharing of around 80% of the water, whilst retaining 20% to sell to farmers who had particular emergency needs. This provided a communal fund that had paid for the maintenance of the water channels that in many other areas quickly fell into disuse.

After tea and biscuits we went to look at his shisham trees. He told us about how many farmers in the area had come out of shisham production after a blight affected the trees more than a decade ago. The development of new hybrids had encouraged many to start planting again.

This was one of the very few locations where I could get to photograph a farmstead with a mixture of males and females in the frame. People are not only shy in Punjab and Haryana but the custom of the area is that the woman should wear full face scarves in public and generally disappear into back rooms on the arrival of outsiders.

And back to Delhi for the next stage of the trip.

I am a photographer and writer and I have been an advocate for the conservation and the sustainable utilisation of the world’s trees and forests for more than 25 years. Over that time I have had the opportunity to visit more than 40 countries and write or co-write more than 30 books including Ancient Trees – Trees that Live for a Thousand Years.

Over the last decade I have the great pleasure to visit and produce images from almost all the areas where TFT have projects including the Congo, Laos, Vietnam, Malaysia, including Sabah, and parts of Indonesia including Java, Sulawesi and East and Central Kalimantan.

I am teaming up with TFT once again as I begin a journey through India and Sri Lanka that I first thought about 15 years ago. The plan is to retrace the remarkable journey taken by Sangamitta, the 25 year old daughter of King Ashoka, nearly 2,300 years ago. Sangamitta carried a cutting from one of the most significant trees in religious history. It was a cutting from the very tree under which Buddha had gained his enlightenment and the small tree she took all the way as a gift to the King of Sri Lanka is still thriving and is considered to be the oldest verifiable broad-leafed tree in the world.

I am always looking for ways of getting people to think positively about trees, forests and their utilisation and I thought that I may be able capture people’s imagination by undertaking a journey, not only in space but also in time.

My plan is to start at the present day Bodhi tree (an offspring, sadly not the original) in Bodhgaya travelling along the Ganges to Kolkata and the Sunderbans (with its dense mangrove forest and 300 Bengal tigers) before heading down the east coast, looking at trees and forests along the way before finally heading on to the Bo Tree in Sri Lanka. Here I am looking forward to being able to sit beside (possibly touch) a tree that has been alive for more than 2,200 years and which is as revered today as the day it arrived on the island in its golden urn back in the late Iron Age.

I am hoping that my own journey over the next five weeks will inspire people to think about the “journey” we are all on and how central trees and forests have been, and still are, to everyone on the planet. 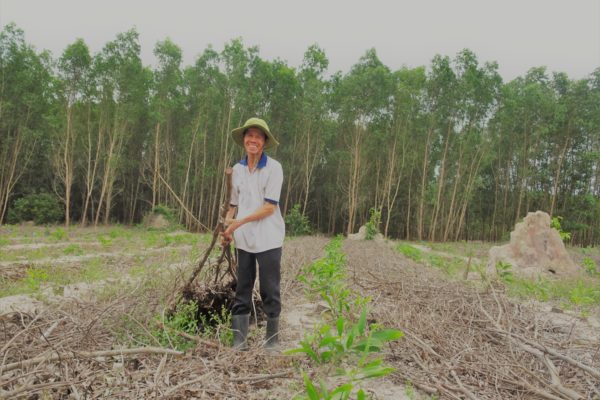