Chances are the chocolate you last ate was from the Ivory Coast - the country is the biggest cocoa producer in the world. TFT's Gerome Tokpa explains TFT's work with cocoa farmers.

When I was seven my father taught me how to use a machete; he was a cocoa farmer and he wanted to pass on the skills of working in a cocoa plantation to me and my brother. My father also taught me to become a man – my best holidays were spent under the cocoa trees helping him to maintain the only source of revenue he had to feed the family. By doing this he knew we would have a livelihood to fall back on should we not succeed at school.

Cocoa farming is a big part of life in Ivory Coast – the country is the biggest cocoa producer in the world – responsible for around 40% of the world’s trade. Smallholder farmers play a huge part in cocoa production – there are in the region of around one million cocoa farmers in the country, with cocoa responsible for 22% of the country’s Gross Domestic Product (GDP). But smallholder farmers need more support and coaching if they are to be successful. The state can only do so much; the cocoa certification has led to some improved levels of awareness, but it is showing some limits.

What is now needed at cocoa plantation level is a coordinated approach to supporting and coaching cocoa farmers to implement sustainable farming practices in order for them to make more profit. That is what TFT is working on in Ivory Coast with CÉMOI. The subject of cocoa farming is very close to my heart, so I am very passionate about this work.

In February CÉMOI, France’s biggest chocolate manufacturer, became TFT’s first cocoa member. We are helping CÉMOI to implement its ‘TRANSPARENCE’ programme, which is committed to tracing its supply chain from the chocolate bar to the cocoa bean.

This is big news. At present, the majority of chocolate manufacturers buy their beans much further down their supply chain. They cannot trace their beans back to their source, which is the smallholder farmer. This leaves those farmers isolated, having to deal with daily economical, environmental and social challenges that prevent them from increasing their production and improving their livelihoods.

We have brought in aditional staff to implement the ‘TRANSPARENCE’ programme. Our work focuses on collecting data from cocoa farms. Our research isn’t limited to data, though – it is important that we gain a full understanding of each farmer’s way of life. How they currently work will help us to understand how we can support them best.

The programme is split into three phases:

TO KNOW cooperatives’ and farmers’ current practices. Gaining a thorough understanding of how they work will help us to better support them.

TO VERIFY AND DISCLOSE the progress made in implementing CEMOI’s policy, measuring its performance.

Part of my role is analysing the data our team collect from the field. By making our model work we can create momentum, which will hopefully give us the opportunity to replicate it on a bigger scale throughout the country. At present farmers are faced with several obstacles. The first task is to improve the productivity of farms. One kilogram of cocoa sells for 1.3 Euros. We have found that many farmers are producing between 230-500 kilograms of cocoa per hectare. That yield needs boosting to something in the region of 1000 kilogramme per hectare if they are to have a successful harvest.

The cocoa harvest time in the Ivory Coast is between October and December, then again in June and July. These are the only two times during the year that farmers get paid. This can create problems – farmers have families to feed and they are often suspicious of paying the money they have earned into a bank, often because banks are far away from their villages.

A successful harvest is dependent on the standard of the plantation – it needs to be nurtured and maintained throughout the year. In order to achieve the sufficient quota of cocoa per hectare it is necessary for farmers to plant 1,320 cocoa plants per hectare. Some farmers hedge their bets – unsure this amount of crops will produce the desired results they plant a bigger number of plants – maybe as much as two or three thousand per hectare.

But rather than produce more cocoa this produces less. Cocoa needs light. If the plants are bunched too closely together it creates humid conditions and sickness to the plant. Even with the sufficient number of plants, they need attention and space to grow healthily. They need cutting and pruning four times a year. Any dead branches must be removed from the plant to ensure a healthy crop.

This operation requires fully organising the farm’s workforce. The state offers a form of support to farmers which we are complementing with our own work in the field. This has been well received. Our staff are very hands on, listening to farmers and staying with them for months in order to get the much needed full understanding of how they work. The close relationships we have made with farmers are crucial in the success of our work. It allows us to get to the very heart of the cocoa industry. 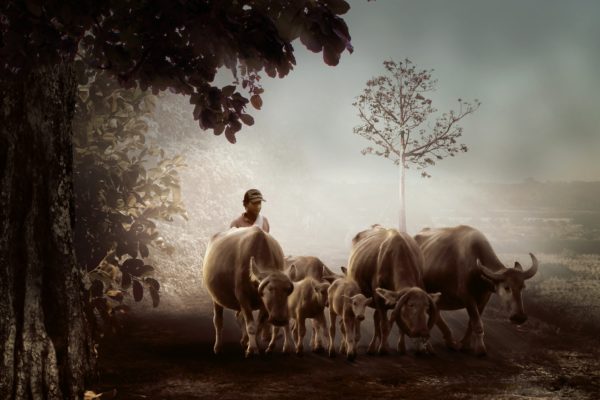